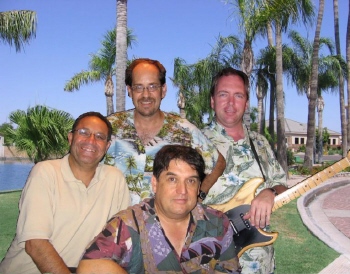 Caribbean Cruisers of Arizona has been around since 1990, playing Calypso, Junkanoo, Reggae/Ska and Latin in the Phoenix circuit. Regarded as Arizona’s best Calypso and Reggae band, the group explodes with a musical celebration of Islands, Trinidadian, Bahamian and Jamaican music of various styles.

Their first album “Maiden Voyage” came 2001 and they are now working on a next album. The new album will include guest performances by Crazy, Nehemiah Hield, former lead singer of
Baha Men and Lars Hansson of Soca Rebels.

Richard Carbajal came across Soca Rebels website some years ago and the fact, that a band from Arizona and a band from Sweden was so much involved in Caribbean music, started their friendship. In 2005 Lars Hansson visited Richard Carbajal in Arizona for some recording sessions. Caribbean Cruisers recorded a remake of Lars Hansson’s song “Dis Is Trouble” with Lars on vocal.

Crazy joined up in Arizona and a new calypso called “Doctor’s Advice” was recorded for Crazy’s 2006 album. A remake of “Chief Crazy” with Caribbean Cruisers and Crazy plus a joint venture between Richard Carbajal, Lars Hansson and Crazy on the song “Spring Garden” was also a result of the recording sessions.