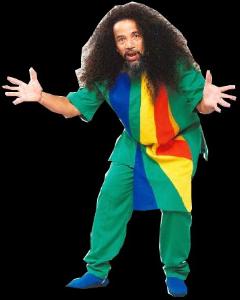 Crazy, the calypsonian from Trinidad & Tobago, is among the top performers of Calypso and Soca music.

A performance of Crazy is a wild, happy and crazy experience and ranges from social commentary calypso to wild party soca.

Crazy is the first artist to sing a Parang Soca in 1978 and is also among the first to sing a crossover Chutney Soca with Nani Wine, a big hit in North America and the West Indies 1989.

Being on the calypso/soca stage since 1972 Crazy is the absolute choice for all soca party!

The first meeting with Crazy’s music was when Lars Hansson was in Trinidad for the carnival in 1989. Nani Wine was the song that was playing all the time during the festivities.

The atmosphere of the carnival in Trinidad and the irresistible beat of the soca music gave Lars the idea to form a soca band in Sweden. To reach the swedish audience Lars translated the song that was his favourite from the carnival to swedish. Nani Wine became Farmor Sväng in swedish and Lars corresponded with Crazy to get the permission to record Nani Wine in swedish.

Lars and Mats Hansson was in Trinidad in 1991 and released the song which hit the top ten billboard in the end of 1991. Crazy and Lars met and plans for a tour in Sweden was on the go.

In 1992 Soca Rebels and Crazy made a 4 days tour in Sweden playing in Karlstad, Norrköping, Stockholm and Göteborg.

Since 1999 Lars has run Crazy’s Official Website on the internet.

2003 was the year when Crazy came back to Sweden and performed with Soca Rebels in Stockholm at Nalen. During this visit Crazy and Soca Rebels started a collaboration also in the studio. Lars, Mats and Björn Hansson arranged Crazy’s song Tahiti Baby for his 2004 album Trinidad Crazy.

In the summer 2005 Crazy, Lars and Sarah Hansson of Soca Rebels teamed up with Caribbean Cruisers in Arizona. The result was a recording of Crazy’s calypso Doctor’s Advice that appears on the album De Maddest.

2005 was also the year Crazy & Soca Rebels returned to Stockholm for a gig at Kolingsborg
In the studio they produced and recorded the song Accountable for Crazy’s 2006 album De Maddest.

2009 Soca Rebels release Rebel Jam featuring Crazy with all the songs produced for Crazy on one album, remixed and with additional versions of Let’s Have A Party (Soca Mix) and Body Talk (European Mix)